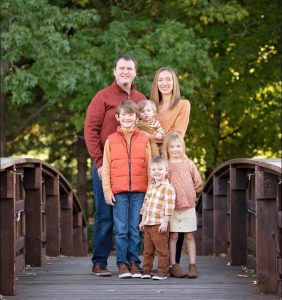 Raised in Sarasota, Florida, Mark had the benefit of godly parents and a good Christian home. His parents, Bob and Janet Truitt, provided the foundation of the Bible in his life and also an education, homeschooling Mark from Grade 2 to graduation. Mark was saved at a young age after understanding his need for a Savior and trusting Jesus for his salvation. He was also baptized at Trinity Baptist Church in Bradenton, Florida. In high school, Mark attended Liberty Baptist Church in Sarasota and served in the choir and in bus ministry. Upon graduation from high school, Mark enrolled at Trinity Baptist College in Jacksonville, Florida, where he met his wife, Christine and began learning sign language in order to work with the Deaf in Jacksonville. Upon graduation in May 2006, Mark began working as a Youth Pastor and Music director at Faith Baptist Church in Titusville, Florida. Mark and Christine were married January 19, 2007. Mark was ordained at Liberty Baptist Church in Sarasota, Florida and after 4 years of service in Titusville, moved back to Jacksonville and began working with the Deaf again in 2011, where Mark and Christine also added their son Malachi to the family on Oct. 23, 2011. In December 2014, Deaf Liberty Baptist Church of Overland Park, Kansas, called Mark as their Pastor. Pastor Mark and Christine are excited to work in the Greater Kansas City area reaching the deaf community and disciplining the followers of Christ. Later during the year of 2015, their daughter, Jayelle was born in Overland Park, KS on August 20, 2015. In the year of 2018 on September 27 in the addition to Truitt family, a son, Levi was born in Overland Park, KS. Two years later a son, Ethan was added to Truitt family on December 21 , 2020 in Overland Park, KS.

"…where the Spirit of the Lord is, there is liberty." II Corinthians 3:17